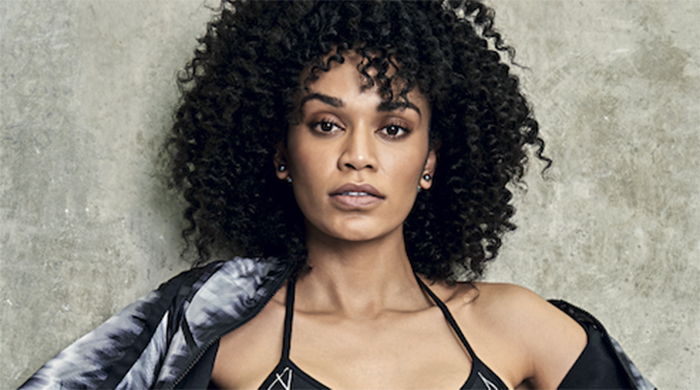 Pearl has a lot on her plate, but she makes time for this one move…

As media darling Pearl Thusi springs from her shuttle, all happy smiles and effortless beauty, it’s difficult to believe that she is struggling with jet lag. Back in South Africa while Quantico — the television series she is currently filming in New York — takes its Christmas break, she’s still on NY time. I’ve had a good eight hours of sleep and I’m not sure that I’m going to be able to match her energy.

This abundant energy is how Pearl has achieved so much in her 28 years. Not only has the mom from Durban forged a successful modelling career, starred in movies, hosted TV and radio shows and now landed a role in internationally acclaimed television drama, Quantico, she has also carved out a career as a successful business woman with the launch of her own haircare range, Black Pearl Hair, and is a dedicated advocate for wildlife and domestic animals.

Believe it or not, last year got off to a slow start for the actress. This didn’t last long, however, as she started work on two shows, Lip Sync Battle Africa and a talk show. “How 2016 flipped for me and my career was just unbelievable… It was only right that it led up to an international stage at some point. But I didn’t expect it to happen so quickly,” she says. “I was considering having a baby. That was my plan. I wasn’t going to leave my career as such, but just start building a family.” Being a working parent can be difficult without the right support structures, but Pearl knows first-hand that it’s possible to do it. Her plan was to climb Mount Kilimanjaro in July and then fall pregnant in August. But she’s always wary about making plans. “I think in this industry, and life in general, you’ve got to roll with the punches, you know? I like to say roll with the blessings. You can have a plan, but things will change.”

Her role on Quantico came from a fortuitous Google search that resulted in series creator Joshua Safran asking to see her tape. Pearl was wrapping up Catching Feelings, her first drama-comedy movie, when she got the news. “I taped [my audition video] over and over again because I wanted to get the best one,” she recalls. “I would sleep at 3am, doing it again and again until I just couldn’t do it anymore.”

As a former model and an actress, she’s used to the pressure of auditioning for jobs, “I’m never ever stressed about a gig,” she says. “But because Quantico contacted me, I just felt like if I mess this up, I’m giving it all up, I’m over this because, I mean, what else do I want? I had sleepless nights being like, ‘They found you, they asked you to audition, this means that they are willing to do what it takes to take you there. If you mess this up… There’s no hope!’” she laughs.

Of course, she didn’t mess it up and now plays the part of Dayana Mampasi, a Type-A Zimbabwean lawyer who is being recruited by the CIA. The character is a good match for Pearl because “I always hear that I would’ve made a good lawyer from friends because I’m very quick to state my case.” The show features a diverse cast with actors of all nationalities, from former Women’s Health cover star, Priyanka Chopra (Indian) and Yasmine Al Massri (Palestinian-American) to Blair Underwood (American) and Russell Tovey (English).

“It’s really incredible because we are learning so much — not just about each other, but about the world because everybody’s got these interesting opinions and the way we think is different,” she says. The cast have bonded together really well and Pearl attributes that to the fact that they are all in similar situations. “What really binds us together is that most of us are away from our families,” she explains. “I think that’s why we embrace each other so much — because we’re in the same boat.” For Pearl, the cast has fulfilled an important role in her life while she’s been in the States, “They’re my family,” she says. “I enjoy being at work more than being out because I feel like my friends and family are at work — the people I want to be with are at work,” she explains. “I work with phenomenally amazing, kind, giving, funny and extremely talented people,” she says.

It’s only understandable that Pearl’s life has changed since she joined Quantico, but one of the most important changes goes way beyond just fame and fortune. “For the first time, I’m alone. I’ve never really had the opportunity to be alone,” she explains. “I would say that I really needed this. When I left home, I went straight into a relationship, had a child, then I was always with a nanny or a family member. I’ve never been one woman able to think about who I am and what I want,” she says. “I’ve really had to look in the mirror and learn more about myself and what I do with my time. I’ve realised that I’m not really sure what I like… I’m learning about myself now at the age of 28 — who I am, what I want, what I don’t like. I’m figuring these things out now that I’m finally on my own.”

Since she started working on the drama series six months ago, the actress has spent little time in South Africa, popping down for a week or sometimes even just a few days here and there when she can. With her daughter, Thando, her fiancé — respected sports journalist and media personality Robert Marawa — as well as the rest of her family here in SA, it’s difficult for her to be away for such long periods of time, “It’s not been easy, but I’m coping just because they’re amazing and I love them and it’s worth it.”

Pearl and Robert kept their romance quiet for a long time, but now the actress is open about their relationship, “I’m completely obsessed with him. He’s the most amazing thing. We’ve been dating for a while — people found out late — but he still makes me feel like we just met last week,” she says. “He’s so kind, he’s so generous, he spoils me, he just loves me. It’s incredible,” she says. “It’s the type of love I wished for when I grew up and thought I’d never find and can’t believe that I’ve actually found now.”

Back in SA, Pearl loves hitting up S.W.E.A.T. 1000 classes, but her busy and sometimes unpredictable schedule, combined with icy New York City weather conditions over the winter has forced her workout plan to evolve and become a lot more innovative. So, seizing every opportunity, she sneaks in what she can when she can.

Her room in New York sits at the top of a long flight of stairs, so when she comes home with lots of bags, she gets in some cardio. “Sometimes I leave stuff behind and just run up and down the stairs to divide the load,” she explains. A jogging enthusiast, she’s learnt the hard way that in New York winter, running is more of an indoor sport. “It’s too freezing to try jog now — I literally couldn’t feel my legs. My skin was in pain it was so cold.” While her schedule has made it difficult to plan exercise, the uncertainty appeals to the actress. “I enjoy the consistency of the inconsistency in my life,” she says. “I really like the fun aspects, the spontaneity aspect of exercise. My career has forced me to enjoy those types of things because I never know what’s coming next,” she says.

Pearl knows that exercise isn’t the only element to a healthy lifestyle. “Just how active you are alone isn’t good enough. You’ve got to ingest the right stuff so that your body can have the right output.” However, being on set for long hours every day makes it difficult to make the right food choices all the time. “When you’ve been in the same place for 16 hours or even 12 hours and those doughnuts have been staring at you the whole day, it becomes very difficult to make the right choices,” she says. (According to the actress, doughnuts are ‘do nots’!) “That’s the hardest part really and that’s where I’ve struggled because you get really tired and weak and frustrated when you’ve been waiting three hours to shoot. That has been my weakness and it’s something I’m slowly overcoming.”

In an effort to avoid the temptations that set life throws at her, Pearl sometimes brings her own food to work. She also drinks a lot of fresh juices, water and teas. “I love concoctions! My latest concoction is cayenne pepper, green tea, ginger, honey and lemon,” she explains. “It’s like wine, it’s an acquired taste!” she laughs. “Sometimes I add apple-cider vinegar because it’s got cleansing properties.” When it comes to the food she’s missing from home, nothing beats traditional Zulu meals, “I miss dumplings, steamed bread, the ghetto beef stew. I miss home-cooked food.”

Stay fit and fabulous with SWEAT 1000